Show & tell
The builders are downstairs still and hard at work. Some skeletal parts are now going up for the wraparound verandah. It's all very exciting for us, but not so much for everyone else.
Inspired by my child's show and tell projects at school, I thought I'd show you some bits and pieces I found in a box today. 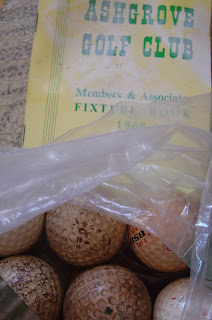 Firstly, what could be more interesting than a bag of old golf balls. Gwennie was a keen golfer and played at the Ashgrove Golf Club. These are her golf balls, stashed in a plastic bag about forty years ago. Also in the bag was her Fixture Book 1969.  Inside the Fixture Book is her handicap certificate, a little card for her scores.  Her handicap was 27, which my husband tells me is not too bad for a woman of her age. She would have been about 57 at the time. 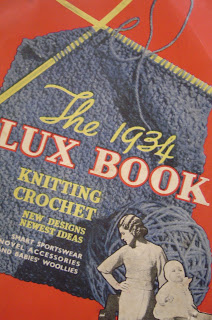 This is the 1934 Lux Book of Knitting and Crochet. It's a thin paperback including: "Smart sportswear, novel accessories and babies' woollies'.  In 1934 you could crochet a sleeveless pullover for your fella, a sunsuit for the baby and if time allowed, a cape and beret for yourself. 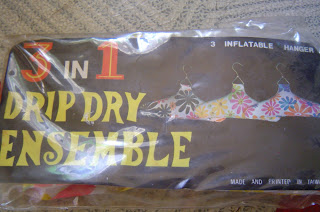 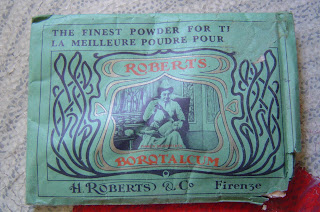 This is a paper packet of Roberts Borotalcum. From my research it was first created in 1878. It's, and I quote, "Refreshing Absorbent Antiseptic Prepared from the finest soothing ingredients this delightful powder possesses all the requisites of a perfect toilet powder. Soft as silk, light as a veil and deliciously perfumed it is the best final touch after bathing for adults and children." Made in Florence, Italy.
Another example of the old domestic debris Euphemia has thrown us, which would have been tossed in most other houses. I don't want this but if anyone else does I'm happy to post it to you. Just leave a comment. 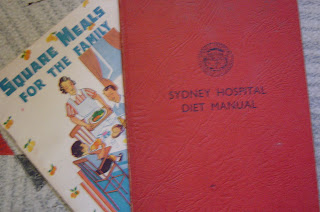 Someone, and I would assume it was either Gwennie or Doris, had quite the fascination for the perfect three square meals a day. I've found so much literature on this topic.
This booklet called Square Meals for the Family was published by the Mothercraft Association in 1939, right on the cusp of World War II.
The introduction reads:
The compilation of this little book was first undertaken during the recent severe economic depression. It was published by the Social Service League in 1933 in the hope that it might be a guide to mothers who were faced with the difficult task of catering for their families in that period of much reduced incomes.
My children would be chuffed to see an advertisement on page seven for Pauls Extra Cream Ice Cream. It is headed: Every mother should know! and goes on to talk about the calcium and phosphorus in ice cream as though it were on par with mung bean sprouts for goodness.
The recipes remind me of that cookbook that was recently published called Four Ingredients (or something like that). Square Meals is a cooking guide for mothers who were working with an extremely limited number of ingredients.
The Sydney Hospital Diet Manual, while a small booklet, is a complicated concoction of diets for people who are diabetic, or diabetic and taking zinc protamine insulin, or diabetic children, and so on. 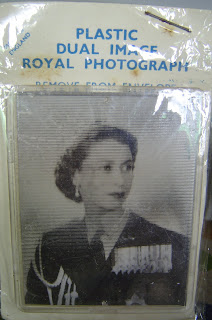 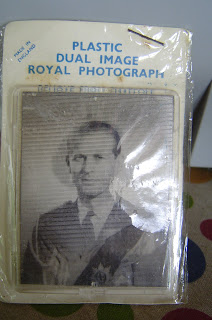 I love this. It's vintage kitsch at it's finest. I can't remember what you call these things, but they are pictures which change when you turn them. It's still in it's original packaging and is called a plastic dual image royal photograph, made in England. Queen Elizabeth is featured and at the merest tilt, charming Prince Philip appears.
This is just too good to stay in a drawer. To celebrate the opening of my new kitchen I'll turn this into a fridge magnet! Gold.
Posted by Madam Restora at 7:58 PM