White out
Despite all my big talk about a more imaginative kitchen, we've briefed Ken the kitchen man about the most classical white kitchen that has ever existed.
Originally, I had in mind a warmer kitchen, inspired by the old public bars of the 1940s with a mosaic tile island bench, stainless steel footrest and a raised surround like a typical bar. I pictured open shelving behind and a general retro fitout.
As it got closer and closer to the time to pin down our ideas I felt a tad incapable of nailing the (quite honestly) vague design I had in my head. If it didn't work, it was going to be a very expensive mistake and one I would have to live with for a very, very, very long time....on a daily basis.
Instead, we've gone for something like this. 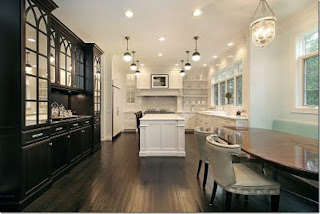 Our floors will be very dark like these, and we've also gone for a similar range and island bench, with open shelves along the wall.
I think the recipe to a good room a lot of the time is to resist fashionable temptation. It also helps if you know exactly what you want before you go shopping so you don't get too side tracked and confused.
I consider our choice more of a white out than a cop out, and I am positive it will look fantastic and sit perfectly with the rest of the house!
Also, while packing over the weekend I found two more items of note. Firstly, this is the original receipt for the purchase of our land. As you can see, it's not in good condition, but we've lightly glued it onto some paper and will get it into a frame for safe keeping.  It's dated August 1886, 18-19 years before the house was built. It has been paid off bit by bit in cash to the total of 36 pounds.
It says the land has been purchased by James Richmond, who would most likely be Mr Baby's maternal grandfather.
I know that Mr Baby's maternal grandparents lived next door, so perhaps they originally purchase three or four blocks of land and gave two of them to Mr Baby's parents? 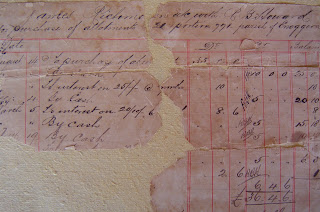 I found a lot of copies of this photo (below) when I was clearing out the house last year. I gave all of them back to Mr Baby, save this one because I love the photo so much and it has Gwennie in it. I can only assume they are all dressed as characters in a play - quite possibly a Nativity?
Gwennie is in the front row on the left hand side. She is a young woman. 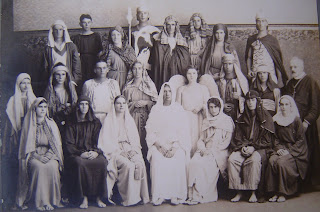 Posted by Madam Restora at 4:18 PM