White on white....on white
Craig the painter sprayed our walls and ceilings on the weekend. True to it's name, Dulux's White on White is very....white?
It's just what I wanted though, a whole lot of blankness to display what will no doubt be an endless display of 'thises' and 'thats'.
I like to change rooms around a lot. Even as a small child I would be hellbent on pushing heavy pieces of furniture from one side of my bedroom to another, frequently. I love to try different combinations in case I've missed the very perfect arrangement.
The house, once dark and dank is already filled with light. Below is the view looking down the hall to the back door. 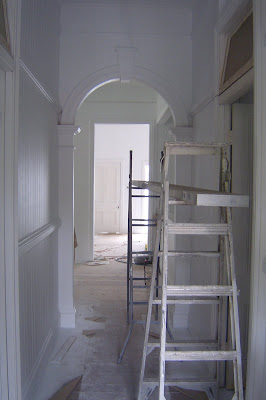 The view below is looking across the main bedroom and
through french doors to the wardrobe. 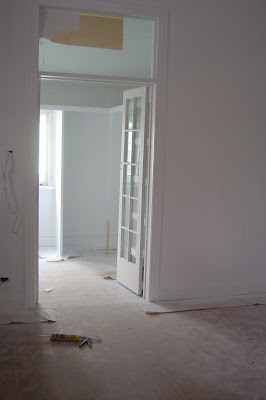 My pantry is coming along very nicely. 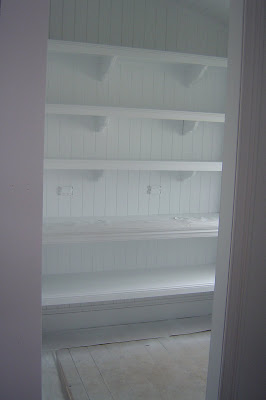 This photo below is taken from the dining room, looking across the kitchen and into the pantry. The kitchen island is covered with a dust sheet. 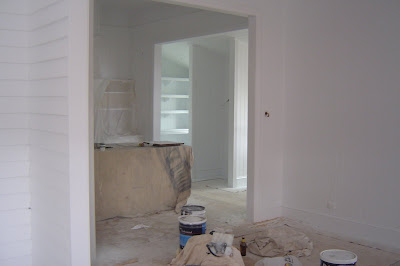 Our rustic old french doors should look a treat against the pristine white of the walls. 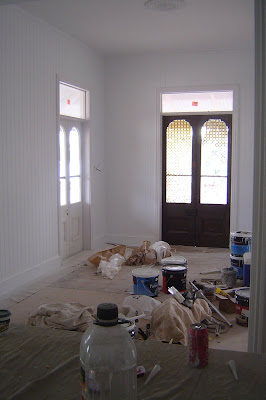 Craig is doing such a fantastic job. Everyone who comes to look at the house comments on the quality of his work. The builders are very impressed too. I can highly recommend him. If anyone has a painting job to do in Brisbane, give him a call. His number is 0420 927 273.
Even though we're nearly through it all, our nerves are probably getting a little more frayed than they were in the beginning when everything was full of possible disaster.
My nerves were particularly delicate on Monday morning when I went to look at the paint that was sprayed over the weekend.
When we first moved out of Euphemia I collected all our linen and washed it in an effort to feel I was being productive. I then ironed it all and packed it into zippered bags with little cotton wool balls soaked in lavender oil.
Back to Monday morning. When I walked into the house the first thing I saw was two of our good fine cotton white sheet sets being used as drop sheets over the furniture. My eyes made an involuntary glare, but I pushed on through the front door to see the painting.
When I walked down the internal stairs I came across one of our Onkaparinga woollen blankets under some scaffolding. When I finally got to the bottom of the stairs I found one of the zippered bags, unzipped. I must point out that it was not the painter doing this, but my husband. Whilst I know that it is wiser to give oneself time to calm down before addressing a situation, alas I did not. My poor husband copped a gobful, and poor me has to collect up all the linen and wash and iron it again.
****
When I went to check on the house this afternoon the painter told me that the floorsander had been there to measure up. Curiously, we haven't booked the floorsander yet, so I'm yet to find out who this actually was?
****
Our kitten Teddy is now almost seven months old. He looks like a full grown Siamese, although it's evident that his rabbity longer coat is starting to kick in. We are very fond of him and he considers himself an integral part of our family unit.
I would include a photo of him at this point...if I could find him. He has a real knack of totally disappearing, then reappearing a few hours later like a magician.
I let him out into the garden late in the afternoon a couple of weeks ago, and by the time I went to bed he still wasn't back inside. Around midnight I heard him come in through the cat door and found him crouched in the corner of the laundry. He stayed almost completely still under a blanket for the next few days. On the Tuesday after the long weekend I took him to the vet who believes he was most probably hit by a car or has suffered some sort of similar trauma.
He now seems to be almost fully recovered although his back end is still a bit wonky. His tail is limp and does nothing but dangle in the breeze. The vet has given him six weeks to regain feeling in his tail, before it may have to be docked. I knew we should have gotten one of the girls, they'd never get into this much trouble!!
****
While I only really started this blog as our own record of Euphemia and the project that she is (I cannot lose it if it's online), I'm chuffed that anyone is interested in reading it. I have been conscience of not only including all the ups, but the downs also. I'd hate for anyone to think that this has been easy for us, and wonder why they are finding it so difficult themselves.
I'm surprised that I'm finding the going a bit tougher now that it is nearly over, and there is barely anything to go wrong. I've found myself drinking a little too much wine, and sleeping terribly. It seems like the next three weeks or so are never going to pass. It's like going on a long car trip and finding the last half hour the most drawn out part.
We have pretty much been living in limbo since Easter last year. I didn't bother to unpack all our things when we moved into Euphemia because for one thing we had no cupboards to put anything in, and secondly, I had all of Gwennie's things to deal with too.
Craig has about two more weeks of painting inside left, then we have to get the floors sanded (one day), then it will take another week to put the Palm Beach Black on the floors.
The sound of packing tape being ripped off boxes will soon be ringing in the air, but not soon enough for this little black duck!
Posted by Madam Restora at 7:33 PM