What a difference a dongle makes....
Well, I'm back on-line thanks to my new dongle. That's what my husband tells me they're called, doesn't sound quite right to me? I had no idea they existed until someone told me about them this week, and I was straight to the computer store.
My return to the world wide web is very timely actually because Euphemia is on the cusp of having all her special bits installed.
The new wraparound verandah now has a roof and ballustrading. The small breakout deck is on overlooking the pool. 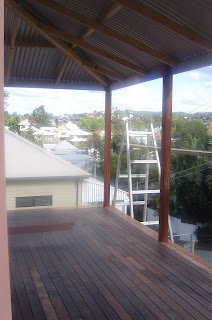 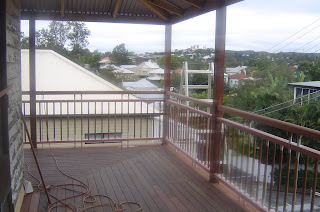 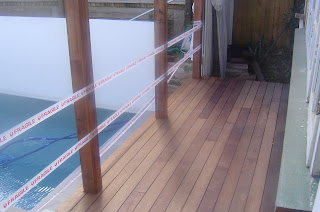 The front verandah has new decking, and Val has been busy making our handsome new stairs - old school style, from scratch, on site. He even mocked up a couple of ways we could re-install the wrought iron. We can't put it back on as it was originally, because the top rail would be too low to meet building regulations.
Inside, at the heart of it, the new kitchen benchtops arrived. I was so excited to see them until I noticed a hole already drilled near the sink. 'What's that?' I asked.
'That's for the tap'. I was told.
Apparently, somewhere along the line, someone assumed we were having a mixer, but our taps have two poles, hence two holes are required.
It's a massive slab of rock, perfect in every way except for the damn hole in the wrong spot. We could drill another hole, but the taps will be off centre and the spout will barely reach one of the bowls. 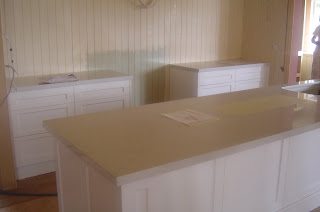 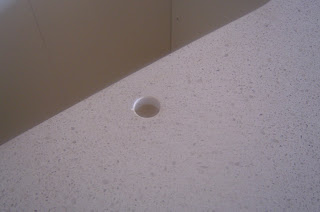 This is the incorrect hole in question. The stone mason is coming to visit us this afternoon to look at possible solutions. I don't know what the answer is. It's such a shame.  Apparently he has already phoned the company where we bought our taps, and the rep just happens to be going to Italy today and can bring back a nickel plated plug next week.
It's our first mishap really, and it's right in the middle of our kitchen, which is right in the middle of our house. I'm going to see that mistake everyday, probably ten times a day. If it were my mistake, I think it would be different, I'd just live with it.
We'll talk to the stonemason this afternoon and see what we can come up with. No one has mentioned the obvious yet.....
On a brighter note, the painter has started, which to me signifies that we are suddenly so much closer to being able to move back in. Although really, he is having to dance around the builders very much. From what I can see, he's doing a fab job of prepping.
Besides a misplaced hole, everything is coming together and looking better than I could have expected. There's only one forseeable complication remaining and that is Myles, our tiler who is yet to show up to even look at the job. He's currently still missing in action. Myles where are you??
The story of Pietro
Before I go, have a look at this. My daughter has a mystical, magical type ability to seemingly hypnotise and domesticate butterflies.
This is a photo of the latest one, whom she (rather oddly) named Pietro. 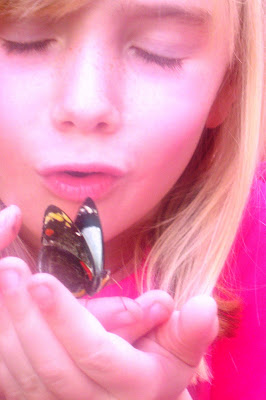 Pietro stayed with us the rest of the afternoon and all evening, but alas by morning he had passed on. He was put into a glass jar and taken to school, but left in the car by mistake. Later that morning I was at my regular playgroup and one of the mums was lamenting her after school job which required her to help her son catch bugs in the back yard to take to school. '
"I've got a dead butterfly in the car", I volunteered.
"I'll take it!" she said.
And so, Pietro, went on to help children even in the afterlife.
Posted by Madam Restora at 11:26 AM