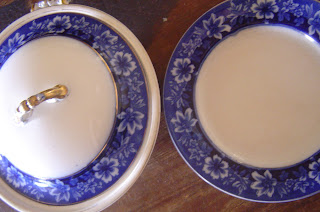 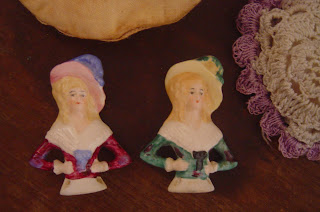 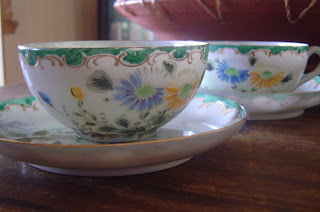 If there's one thing I love more than old linen.....it's old china!
Euphemia has been very generous at coming forth with truckloads of old china, crystal and glassware.
The little china lady busts, above, are a mystery to me. I'm not sure what they are meant to be. I found them both wrapped in tissue and cotton wool and each had been stored in her own crocheted, padded holder.
They have holes in their hips, presumably to attached something, although I don't know what.
The plate and terrine lid above with the dark blue border is part of an extensive dinnerset. It's Johnson Bros 'Turin'. Included are dessert plates, bowls, dinnerplates, three large oval platters and two lidded terrines. 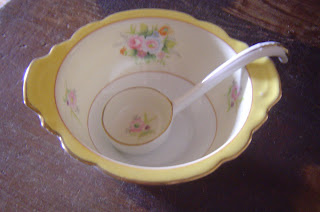 There's not a single teacup or saucer left though. I've been searching the net to find some cups but haven't had much luck yet.
The other teacups below the Johnson Bros (with the green swirly border) are very old and very fine, they're almost transparent. They have no maker's mark, so I haven't been able to find out much about them. 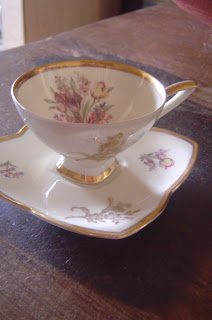 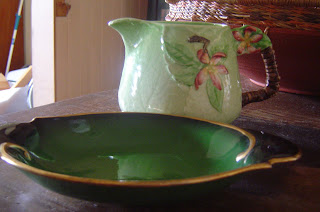 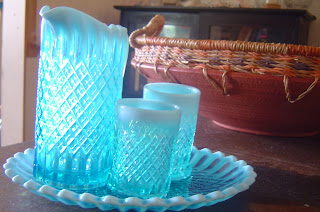 The green jug and plate (not matching) are both Carltonware. My husband is a fan of the dark green plate so that will stay, the but the jug's future is still up in the air! 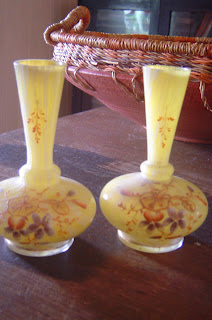 The turquoise glass set above is another Euphemia riddle. It consists of a jug, tray/plate and two tiny glasses. The bottom of the glasses has been cut off. We thought this may have happened when someone tried to wash them with boiling water?? It's such a shame. They're my favourite colour.
The two small yellow glass vases with the painted flowers are very sweet, and they're keepers. They look much prettier in person... 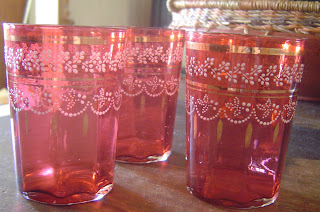 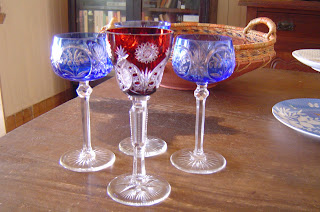 These three rose coloured glasses will no doubt stay with us also. They will have a late-in-life career change and serve as tea light holders.
I believe these four wine glasses are Bohemia crystal? They are very luxurious, and don't worry, they do more than sit around looking pretty.....we've used them on a number of occasions.

Posted by Madam Restora at 7:35 AM