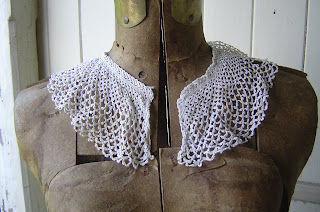 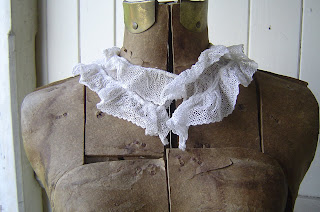 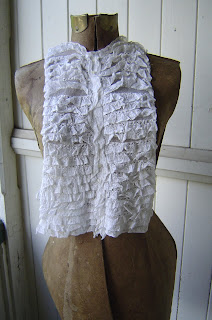 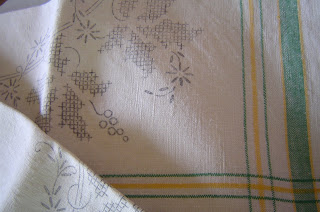 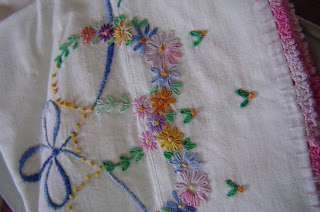 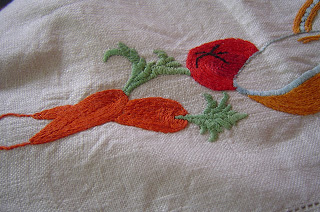 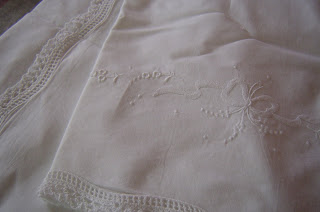 I've always loved old linen. When I was growing up I had a friend whose mother had beautiful pieces of old linen, and this may have been a real influence.
Long before I was ever born, at Euphemia, the two daughters Gwennie and Doris, were obviously busy at their needlecraft, and the beautiful things they made now grace my linen press (actually I don't have a linen press, but hopefully by the end of this year I'll have the mother of all linen cupboards).
At the top of the post are three ruffles and collars, and I've included them in with the linen because they have been handworked too. However, in a fit of....I'm not sure what...I sold them.
I've included a few other items above. One of the photos is of a piece of Irish linen, stencilled with a design, but no one has ever gotten around to starting it. I also have several things that are half complete, still with the needle and thread attached, and I think I've pricked my finger on every single one of them.
I've already mentioned the stencilled tables runners, etc with stickers still attached advertising an embroidery competition....closing December, 1931!!
Among the items are a stack of dinky old tea towels, the type that people used to buy as souvenirs on holiday. I've got plans for them!
There are also thick cotton sheets that are now washed and folded, but were brand new when I came upon them. Plus two thick white cotton embossed bedcovers (the proper name of which escapes me). You can buy reproductions of the style at Laura Ashley.
I found the old 1970s style bed cover, made from highly flammable polyester, the quilted top and gathered frill. Nearly every little girl had one in the 1970s, early 80s.
There's more....some gorgeous old vintage fabrics....doilies galore.....table runners.....table cloths....napkins...
It's all packed away at the moment, but we plan to begin our work in April, so I have to go through the entire house now, it's crunch time, and sort out once and for all what stays and what goes.
Some time in the next few weeks I'll be uploading a whole lot of things onto Ebay. I'll let you know when, what and where you can find it all......
Posted by Madam Restora at 7:58 PM