Retro Classics
One of my interests for a long time now has been in the food we eat, how it differs from our diet in previous decades, and why the majority of us are so porky now. I could name and shame some definite perpetrators in the modern diet (hear that hydrogenated fats, msg and aspartame), but I don't want to get started because I'll probably never stop. Safe to say, food is all around us now, it's everywhere we turn, ie a hotdog stand at the hardware store. Thanks to a diet that is so utterly refined that it never fills us up, a lot of people have craftily added in extra meal breaks during the day, like the one between morning tea and lunch, and between afternoon tea and dinner. The odds of us being able stay trim on a modern diet are not in our favour, but that's all for another blog.
For quite a few years now I have been collecting old cookbooks. I quite often refer to an old 1970s Women's Weekly cookbook that my mother used to use when I was little. I like to see the portion sizes and the simplicity of the ingredients. I love kitsch recipes, and have a great modern cookbook called Retro Classics. A prawn cocktail, followed by Beef Strog and finished with pavlova is still hard to beat.
As you'd expect, after 100 years Euphemia has accumulated her fair share of books, many of them of the cooking and housekeeping nature. One of the little gems uncovered recently is this 1967 Weight Watchers cookbook. 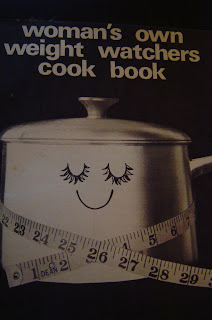 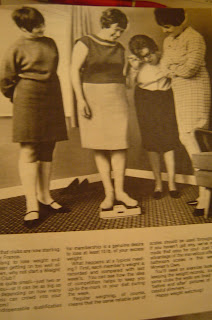 From what I can see Weight Watchers began in New York in 1961 or 1963 so this is a very early Australian Weight Watchers book, if not the first. It came free with Woman's Own magazine. The first paragraph reads:
"What is a Weight Watchers Club? Simply a group of friends who all want to slim - so arrange to follow a diet, meet regularly and compare progress. The idea has spread like wildfire in Canada and the United States.....It all started when half a dozen friends, all trying unsuccessfully to lose some weight, met at the home of another friend who had just slimmed successfully - and was delighted to tell them about it".
It then goes on to list ideal heights and weights for various builds. There's a list of 'What NOT to eat': biscuits, buns, cakes, bacon, fried food, ice cream, nuts, potato chips, puddings, pastry, chocolate and white bread rolls'. No surprises there.
There is another great book called Lady Hackett's Household Guide. It's Doris' book, her name is written on the inside cover. I found some separate pages folded inside the cover. They are recipes that she has kept especially. I got very excited until I had a read of them - Brain Rissoles, Baked Mutton Flap, Tongues in Jelly. Fright Night!! 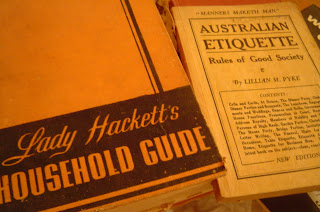 There is also her handwritten recipe for Christmas Pudding including a pound of suet, which I must admit I'm not even sure what it is or where I could get it.  I have a typed page headed "Six Way Recipe" with a basic batter that can be added to to make Sunbeams, Date Cuddles, Jam Tarts, Kisses, Nut Fingers or Bachelor Buttons. Not familiar with any of them either. Another recipe is for Christmas Cake. It's so nice to read it in Doris' own handwriting.
Further inside Lady Hackett's Doris has stashed magazine cutouts from 1952 and 1946. There's recipes, little crochet patterns and a clipping showing how to make the best use of your yard, and in those days that didn't mean subdivide, squeeze in some crumby new house, then take the money and run before your neighbours get a chance to tell you how pissed off they are.
Lady Hackett's herself was published in 1940 and includes all manner of handy hints like how to restore fading silks to oiling the perambulator to teaching a child to walk which goes like this:
"Get any old box about 18 inches high, a beer box is the best, pad well round the inside with straw or shavings and make a cushion for it with some soft material to go round the edge, about six inches from the top put a row of loops made from cloth that the child can pull himself up by; you will find it will delight him and teach him to walk".
There is a plethora of rabbit recipes and cake recipes, including pink cake, silver cake and heather cake.  I think I'll settle down with Lady Hackett later and go through some 'hints upon personal appearance', 'what young people should know' and find out what to serve at 'an engaged girl's tea'. 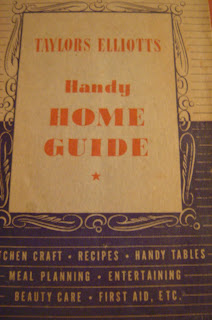 This is another Handy Home Guide, a souvenir of the 1948 RNA Show Brisbane. It includes recipes, beauty and cleaning tips and some advertisements. One ad is for DHA Nerve & Brain Tonic: "If you are depressed, jumpy, irritable - try DHA Nerve and Brain Tonic. It will calm you down, promote restful sleep and restore your appetite."
I have a feeling I could do with some DHA Nerve and Brain Tonic over the next few months!
Posted by Madam Restora at 8:57 PM