Putting it out there
Remember a few posts ago I proudly displayed my kitsch 60s drinks tray. 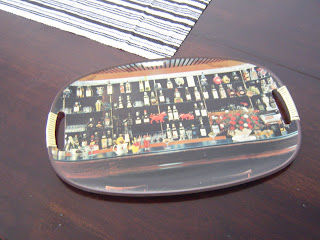 If you look on the shelf in the centre there are two red bulls. A lot of homes had these bulls when I was growing up, and I had it in my mind to actively pursue one for Euphemia. They're not so easy to come by you know.
However, today I was at a Lifeline store. I was looking at two vulgar orange soup bowls, I picked one up and when I put it down, what did I see on the shelf next to it? Tra la la. An El Toro bull, a little worse for wear but good enough and $9 can you believe it?? I thought the one we had was bigger than this, but my mother says it's about the same size. (I was a lot smaller then) 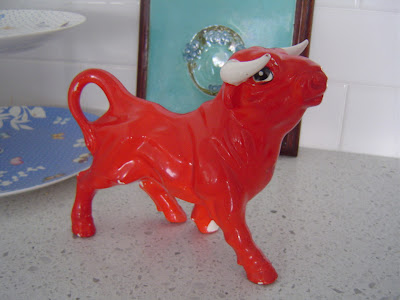 I think I have mentioned my knack for 'conjuring' up things before, it's uncanny. My friend's mother, Carmel, calls it 'putting it out there'. It's a handy skill to develop.
Someone left a comment regarding the bulls on my tray that they were most probably by Aldo Londi Bitossi. However, I have since researched these bulls, and while beautiful, the ones I'm familiar with and that were in many homes in the 1970s were the more garden variety "Made in Japan" version like the little fellow up top.
I also picked up this little sugar pot cover thingy for $4. 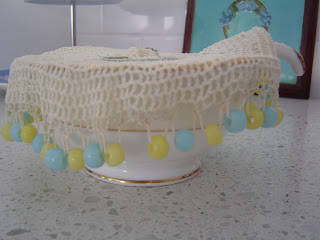 My grandma used to have these, but she had shells on hers instead of beads.

All in all however, an extremely unproductive day where my list of things not achieved far exceeded what I did manage to get done.