Ahoy there, Captain Devoy!
Going back to Euphemia's past for a moment, I thought it was worth asking this question.
When we moved into the house last year I came across this cartoon illustration. 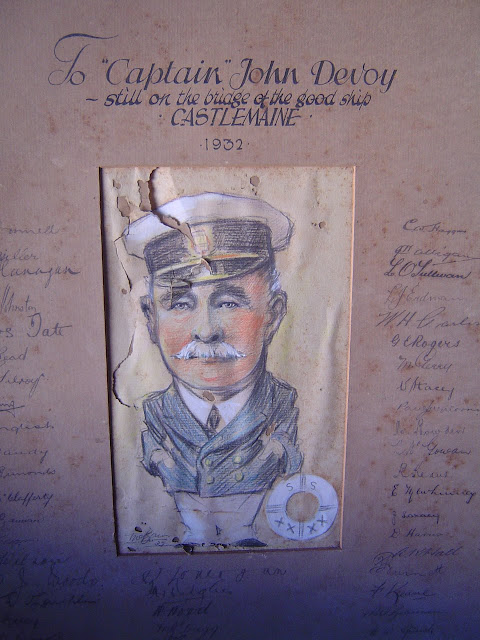 It's of a man called John Devoy. He was the boss at Castlemaine Perkins when Mr Baby's father worked there. John Devoy retired in 1932 and this illustration was part of his send off. It's been signed by all the staff at the brewery, including Mr Baby's dad. I have tried to find descendants of John Devoy to give this to them, but haven't had any luck tracking any of them down.
From my research I know that he used to live in the house called Woodlands, in Woodland Street, Ashgrove, although the house has been moved to it's current position from Ashgrove Avenue or somewhere, which is where it would have been when he lived there.
If I can't find any of John Devoy's family I'll give it to Mr Baby. From what he's told us, his father and John Devoy were good friends. I imagine that on the day John Devoy retired, he possibly had a few beers too many and went home forgetting this keepsake. Mr Baby's father took it home instead, meaning to give it to him, but never got around to it. I wonder how close I am to the real story?
I called Castlemaine Perkins to see if they were interested in it, but they weren't and didn't seem to even realise what relevance it would have to them. They are now owned by an international company. I'm sure Captain Devoy wouldn't be impressed by the current day operation.
Anyway, if anyone is related to this John Devoy or knows someone who is, please leave me a comment. Don't email me because my email has gone to the dogs and I haven't had a spare six hours to phone Optus to rectify the problem.
I'm hoping to be able to return it to the Devoy household soon - you know what they say, better 78 years late than never.
Posted by Madam Restora at 11:14 AM