Our builder Jeff
Sorry for a longer than expected absence from blogging. I have been busy doing 'non-housey' things would you believe.
I've been quite social hosting little ditties at our home, plus going out to dinner (Libertine at The Barracks), and catching up with people I haven't seen in ages due to our renovation haze we've been in.
I've been to Seaworld, and started Bikram yoga. My very good friend Fi has been urging me for years to try Bikram. She swears there's nothing better to rip the fat off the body. It's a series of 26 yoga poses, done twice each, in a room which is heated to 40 degrees, although at times during the 90 minute sessions it feels like 240 degrees. It's not for the faint hearted and is more of a mental endurance test as much as a physical one. I've only been twice so far, but I feel remarkably at home there.
I've also been busy cooking and baking. When we first moved to Euphemia my kitchen was just a room with a kitchen sink and this beast. 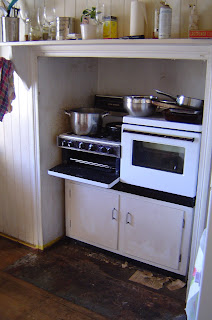 Now it looks like this....only with things in it. 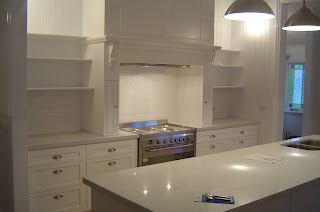 My mother is heading north again on Wednesday, so I'm baking up a storm for her to take up to Dad for a belated Father's Day. I'm making my specialty, lemon butter, an almond and passionfruit cake and this afternoon I whipped up these triple chocolate biscuits for him. They're a bit ugly, but they taste good - butter and chocolate'll do that. 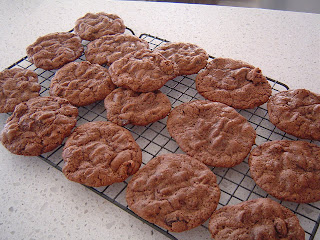 Craig the painter has about one more week of work, basically just the front now, although today he was missing in action. The top side is all done. 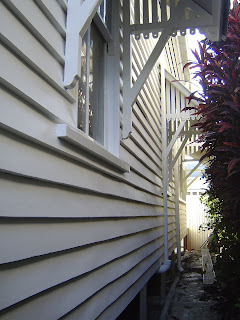 There's also a fair bit of undercoat already on the front. The lattice doors were on the house when we bought it, but they were not on the house when it was first built. My guess is they're probably from around 1920? 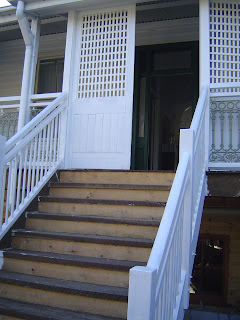 My husband has removed the decorative bit from the room at the top of the stairs, the name of which escapes me at the moment. 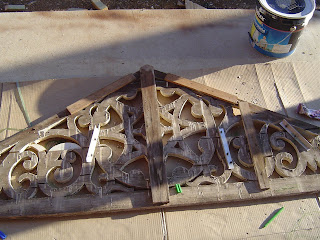 This is it on the operating table (above). It's not in great shape and is even missing bits here and there. We went out Saturday morning to try and buy a new one, but the repros are not good. The problem is they're too perfect, precision laser cut, and do not closely resemble this sort of job which would have almost definately been done on site when the house was being built.
Our first lot of stones are in place now, and will hopefully soon be filled in with top soil, then grass, then apparently a trampoline. 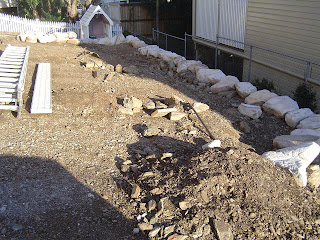 Meanwhile, amongst all the work a very leisurely kitten the size of a cat is 'treating the place like a hotel' says my husband. This is him snoozing in the lobby. 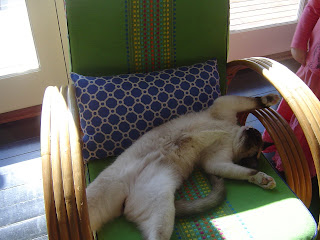 Teddy comes and goes as he pleases via our bedroom window. Last night at around 1.56am I was woken by him out in the lounge room rolling a glass marble across the timber floor as a game.
He meows constantly to be fed, seemingly three times a day.
He also seems to be losing his hair as the weather warms up, which I'm sure I was told wouldn't happen.
Then this afternoon he caught our Jack Russell, Mary Agnes, eating from his bowl. The poor thing was so startled she ran into the pantry and became trapped since there is only one way out and Teddy was blockading it. I managed to break up the scene, but she was even more of a nervous wreck than usual.
Since we don't have a fence yet, Mary Agnes lives over the road with our neighbours who lost their Shetland Sheepdog earlier this year. She is being spoilt rotten, and will probably never want to come home I suspect.
Our front footpath has been picked up by the radar. It currently looks like this. 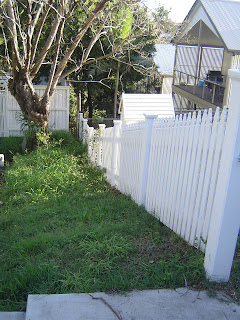 I'm seeing a miniature mulberry bush right down in the bottom corner, some sort of formal hedge along the fence and some lemon trees either side of the front gate. That is, unless someone can come up with a better idea?
P.S. Many people have asked for the name of our builder. His name is Jeff Mair and his number is 0412229630. There! Have been meaning to do that for ages. He has seven sons, most of whom work for him, and he specialises in old Queenslanders. We highly recommend him and his work.
Posted by Madam Restora at 7:35 PM